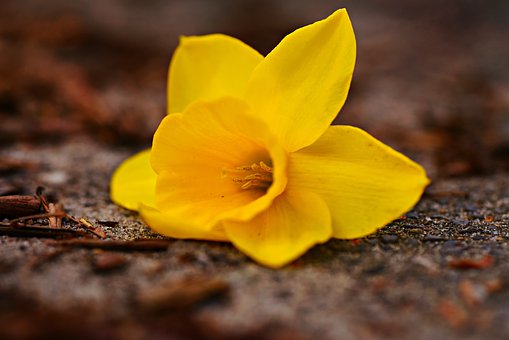 “I’m here, in the garden” mother called back to my distressed cry. Agitated, I rounded the house to the backyard, clutching my overstuffed bear as I went in search of her. I am in dire need of comfort, not even my stuffed companion could give it, except mother, whose melodious hum interjected with the snip and snap of shear against leaves.

Quietly, I walk towards her barefooted. I know I would get scolded for it, but I do not care. I need my mother now far more than I needed my flip flops. I need to see for sure that she is okay and that what I had was just a dream; a nightmare.

Awakening in an empty house had been scary. And for a moment, I had thought my deepest worries true; that mother had left us-that she’d left me!

Our eyes met and with a quick observatory sweep over me, she dumped her gardening tools and crossed the floors with a worried expression.

“What’s wrong?” she probed in Yoruba as she drew close and instantly, I dumped the teddy, taking solace in my mother’s arms instead as she squatted down to my eye level.

I shut my eyes against hot tears and let myself savour her scent as her palm gliding comfortingly over my back.

“Tell me about it,” she whispered back as she wiped streaks of tears off with the edge of her wrapper and patiently waited for me to talk. Though her eyes were soft and demanding, they plead no urgency, just plain patience.

“God forbid! Olorun maje!” She reiterated in Yoruba, snapping her fingers over her head, a common act to ward off bad omen. I watched unamused as she kept at it, even clapping her hands at intervals. But I am more concerned with the fresh bruise on her cheeks.

With such fierce emotion, mother banished the dream to wherever it had come from. She was about the philosophy that every negativity was an attack from an enemy. If only she knew this time she was wrong because fears of death had taken root in my subconscious long before my evening nap. As I watch mother, I couldn’t help wondering the effects of her strongly uttered words; if they actually drove fear or peace into her subconscious.

Mother is enduring, perhaps the most enduring woman I know. For in spite of her constant misunderstanding with father, she kept her diligent service as a proper traditional wife would, and even went lengths to try to convince me all was well, however futile.

I miss Tobi, I am jealous of him and his freedom. Very often, I wish he were also here to witness the bulging rift between mother and father. But unlike me, he is safely tucked in boarding school, and would only get luckier when he passes his post-UME and is admitted to the University of Ibadan as he has always dreamt. There is a lot of possibility for that, as Tobi is pretty intelligent and constantly aces his paper like it was nothing. He is my role model.

My only consolation is that next session, I also will be leaving home and resuming boarding school. That’s why I’d put great effort into passing the common entrance with ‘flying colours’ as mother says, and recently, my entrance exam into Queen’s College. But on another hand, the thought of boarding school scares me not only because I have never gone a day without mother, but also partly due to stories about bullying. Now to think of it, mother herself was being bullied in her own home.

“Mother, I don’t like it when father hits you.” I blurted.

Her lips froze ending her litany, and then slowly spread a weak smile as she enveloped me in another embrace.“Omo mi ko le ye e.”

Then help me understand! My heart screamed.

On a weak dejected sigh, she granted as though she’d heard my thought. “Right now, your father is going through a lot. We have to hope and pray things get better at the company.”

“Is that why he has been slapping you almost all week?”

I felt mother stiffen with a sharp take of breath. Suddenly, I wish I had not voiced it. My big mouth. Sigh!

I started to part to reach into her eyes and perhaps her soul, but she held me tighter. My words however innocent had stung.

“Pelumi,” I felt her heave against my shoulder as she quietly began. “Right now, the company is going through a lot. We are-“ With a hefty sigh, she broke midway and when next she spoke it was for closure. “But we will be fine I promise. It’s nothing we can’t handle.” she finished with a light squeeze on my arm as she pulled away letting on a deceptive smile intended to make light of the not-so-light situation. I might have believed her if not for the tears that pooled in her eyes. Not the sort derived from sneezing or laughing too hard. This was of hurt, and it broke my heart. Things obviously were worse than she let on.

“Come, help me with the flowers.” She said instead and rose, signaling an end to the discussion when a frown slowly crept into her face as she studied my bare feet. And without words, I fled and soon returned with slip on’s. From the garden, she nodded her approval and beckoned me over. Usually, times like this with her were spent sitting and watching her work. I guess what she really craved was an extra companion.

As always, mother was humming to an ancient tone. Her song today like in the past months was sad and sorrowful, and the air ladened with it. Quietly, I watched as brown shriveled daffodil heads fell limply to the ground with every snip, leaving only yellow ones that caused a small distant smile on mother’s lips.

“What do you think?” she stepped away in assessment. I nodded, wondering what better result than this could be attained.

“But you sunshine are more beautiful.” She said to me with a smile, before returning to work.

“Mother loved flowers!” I confessed trancelike and much transfixed on the plant.

“She had a garden.” I turned fiercely to Kamiye, breaking every last thread of reverie.“I remember, I saw it.”

The woman seated with me on the cold pavement flashed a genuine smile. Her elation to my most recent development stood nothing compared to mine.

What a relief this recap was as opposed to that of her death which seemed almost eons ago.  In some way, this one earns me some indescribable intimacy with mother and a glimpse into her character.

“No wonder Tobi opposes a garden in the house. I bet it reminds him of her.” Kamiye pensively stated.“He barely talks about your mother.” She continued with a forlorn look ahead and told how she’d been irked by it during their early days together. “I think for a while, Tobi felt guilty about her death, and maybe angry. I don’t know. He just never mentioned it.”

The creaks on the giant gate stole our attention and we watched as a Sienna rammed crazily into the parking lot. A bloody child was soon rolled upon a stretcher with his mother by his side all the way. Having witnessed a couple of casualties in just a few minutes out here, Kamiye and I took that as a cue to return to my room. The reception was a bit crowded so we had to exercise some patience.

Suddenly, that familiar voice broke into the room, my heart rammed against my ribs in response as Dr. Dominic emerged from behind with the matron by his side. He passed us, barely noting our presence as he moved towards the wailing child and his mother.

Shadows At The Crack Of Dawn-Episode 22