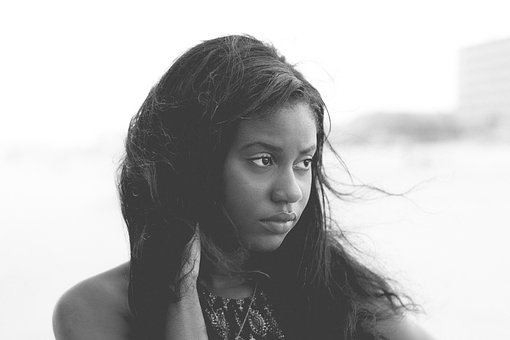 Dominic’s instruction had fallen on deaf ears as Kamsi had soon grown bored. Not even Bisi her favourite nurse who just resumed from maternity leave could hold her attention. So when Kamsi had asked for Pelumi’s ward, she’d innocently spilt, unaware of Dominic’s warning.

Kamsi moved cautiously up the stairs with her eyes roving alertly as she ran across the hall.  She knew every hallway like the back of her hands and soon stopped at the left-winged Private ward.

Her visit would be short, she’d decided while awaiting Tijani’s return as he’d gone to announce her presence to Pelumi, and as the door cracked open, she rushed into it. barely awaiting the grim man’s response. As she rushed in, she was glad to be out of the hallway-she couldn’t risk being seen by her father or some other staff.

Kamsi was not one to be shy, but now in the room with curious glares from unfamiliar faces and Pelumi nowhere in sight, she felt wrongly placed. She inquired of Pelumi, and both women shifted allowing a view of Pelumi beaming into the mobile phone pressed to her ear as she signalled Kamsi forward. She obeyed, and crossed the room unaware of the keen stares, especially from some identical boys, and then she bowed in respect to the women as she reached them, awaiting Pelumi and then taking the woman’s uninjured arm as she returned the phone back to Kamiye. She noticed the heap of gifts at the corner of the room and the cards on the nightstand. Kamsi found the cardboard card mostly fascinating. It was peculiar amongst the lot as it appealed more artistically and screamed Pelumi’s name in glitters. She could tell it was the twins’ handiwork.

However, she asked, yet needing some assurance. “Is it your birthday?”

Pelumi nodded. Her smile livened as Kamsi wished her a good one, backed with a prayer which was met with pure gratitude enough to spur Kamsi into whatever.

As she drank the room and its guests, Kamsi wished for earlier info. She would have made something, bought a gift from her savings, or even asked her father for help if she had needed to. Thoughts of her father rang a reminder of her brief visit.

“How do you feel?” She directed at the woman who was yet to master functioning with her left arm.

“So much better honey, thanks. How have you been?”

Kamsi beamed her response, further realizing her likeness for the dark woman with an angelic smile. Again, she found riveting to the gifts, surprised as she’d never seen as many packages for a grown-up. Pelumi was obviously loved.

Pelumi decided to unwrap them, and Kamsi thrilled in anticipation. She quietly watched as layers and layers of gifts came undone. And Pelumi’s face took a more exciting turn at every reveal from the latest I-phone to numerous pricey gadgets. She was way engrossed when Kamiye surfaced with a plate of chicken and chips, and another of prawn crackers, both of which she loved.

Kamsi’s refusal was shocking to the women, but they would not understand as her father had warned her never to accept things from ‘strangers’ even if it didn’t matter that she was getting to know the beautiful woman. Knowing the term ‘stranger’ might be hurtful for the woman if she explained, she didn’t. She only maintained her smile as she politely declined.

“I understand.” Kamiye wittingly said with a look of admiration as she left and this time again returned with a bag of packed meal, a bottled Coke and cake and then placed it beside the girl in a manner short of refusal.  “Your dad is friend’s with us. Just tell him it is Pelumi’s birthday and it is from her.”

Kamsi glared mutely at the woman as she glided across to the boys busying at some video game, and then muttered a strained appreciation as she returned from serving the boys. Warmth seeped into Kamiye’seyes; the little girl would never know how greatly she’d been impressed.

But looking at the child, Kamiye felt some guilt and began to rethink her actions, mostly whatever trouble she had just caused the child. In regards, she would see Dr Dominic because she would not forgive herself if the child were punished. Thankfully, the good doctor was relatable, and there was no doubt about his understanding. He was the reason for Pelumi’s life because, without his impact in the wreck, none would be here celebrating. So asking his child to be a part of that celebration was the least anyone could ask. She hoped he understood it.

A brawl broke between the boys and the urgent call for Kamiye told Kamsi she was their mother. Kamsi watched her intervene, playing the arbiter between both boys in a game she barely understood but yet instilled some understanding and quiet as both settled and restarted the game.

A glance at the meal struck a reminder of her father, she needed to leave but not until taking a moment to admire the black perhaps most beautiful stilleto she’d ever seen. The black studded pump was even more striking against its signature red bottoms; Lou boutins, Kamsi recognized. She had seen them first on Linda her father’s ex who seemed to be a sucker for it. Though she and Linda seemed to agree on Fashion choices, it did nothing to promote any likeness for her.

Kamsi watched as an equally beautiful lady helped slip them on Pelumi’s feet. If she’d thought them beautiful in the box, they were even better on Pelumi’s legs.

“It’s beautiful Eniola, I love it.” Pelumi whispered in delight.

Kamsi agreed as she picked a foot for examination, mentally applauding Eniola’s taste as she thought up ways to pair them. Kamsi could barely wait to grow and explore fashion like she intended, except adulthood seemed aeons away.

Kamsi slipped from the group as all three women continued their chat about their love for stilettoes. She started to leave but made a stop at the twin boys who barely regarded her presence as they proceeded with their game, battling for a winner! She looked on bemused as one of the twin threw up his hands and declared himself the winner just as the game ended. Only then, did the boys finally turn to address her. She was pleased to find them nice, and what she had intended a brief dialogue with the pair, soon turned into a round of game as they challenged her to it.

“What do you know about games?” Tolu asked in a condescending smile.

She glared at the paused screen. “A lot about dragon balls, more than you can ever imagine.”

Tayo blew a low whistle and more than gladly relieved his pad to her. For him, the mere recognition of the game’s title was all it took to have earned her a place on the battlefield.

And unexpectedly, Kamsi was found pitched against the other twin who snickered and rubbed his palms as one preparing to prove her unfit while Tayo jeered him on.

Each chose their choice characters, and Tayo piteously shook his head at Kamsi’s choice as opposed to his brother. So she knew little about the game and how to wield a pad, Tayo awarded her a little more credit. But that would not certify her victory.

The game began on a draw when both won consecutive rounds, but at the end of four, the boys were shocked as she’d won three. “See. I’m better.” Kamsi sneered, bruising both boys’ ego, Tolu’s mostly.

Tolu cried in defence, and she laughed even more at his litany of reasons. First, he posed her victory sheer luck and happenstance and then claimed to have exercised some restraint because she was female and he could not handle her in tears.

Tayo, on the other hand, was clearly mortified at his brother losing his ultimate winning streak at Dragon balls.

Kamsi was far engrossed with defeating Tayo a second time, she barely heard the knock on the door and continued the struggle to win, until the stern mention of her name. She froze as she heard the familiar voice.

Dominic was grim and hard-faced, Kamsi cringed as she stared at him.

She dropped the gamepad with a loud crash and then with wobbly feet started across the quiet room downcast.

Even for the boys, the game was long forgotten as they stared curiously and alertly at the man, undeniably Kamsi’s father who brewed silent fury.

“He does not hit me.” Kamsi voiced, overwhelmed with a deep urge to defend her father. She went ahead with a subtler explanation. “Daddy only scolds me when I deserve it, but daddy would never hurt me.”

Despite the girl’s earnestness, Pelumi could not help wonder the sort of punishment as she relieved flashes of her dreams.

For the next few minutes the air filled with a nervous chill, the only movement was Kamiye’s as she elegantly strutted to the pair of father and child and handed Kamsi her take-home pack. Kamsi stayed motionless and unresponsive by her father’s side. Kamiye seeing the child’s resolve pushed further. It was too late to back down. “It’s Pelumi’s birthday Doctor and we enjoyed sharing our joy with Kamsi.” She looked around spreading her arms to the room. “None of us would be here today without you.”

“It’s not me. I just happened to be in the right place at the time.”

“Well God led you there. You were his vessel.” Despite the stiff air, Kamiye’s voice rang with much coolness.“Now is it too much to ask Kamsi to be a part of it?”

Dominic felt his anger ebb at the woman’s reasonably spoken words and impulsively returned her smile as he asked Kamsi to take the meal, which she obeyed yet downcast. Kamiye nodded her appreciation and then returned to Pelumi’s bedside. By now Dominic was less angry and more amused at the whole scenario.

To everyone’s awe, he broke the tensed air when he sent Pelumi birthday wishes, and afterwards, let out the door with Kamsi who would not dare a look behind. One fact was certain, she was toast.

Shadows At The Crack Of Dawn-Episode 80

Shadows At The Crack of Dawn-Episode 4