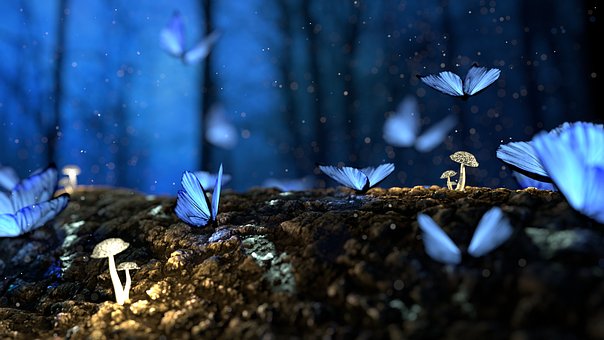 I awoke startled to both concerned faces. A quick scan of reality registered that the last moments was just a dream, though it didn’t feel like it. I took quick deep breaths to calm my nerves of the chill running down my spine.

Sigh! Why does it feel so real, I can almost feel those nails painfully digging into my skin and the paralyzing grip of those hands.

“Are you okay?” Kamiye seemed worried.

“Bad dream,” I whispered, tightly squeezing her palms and gathering some comfort in it.

“Would you like to talk about it? That sometimes  helps.” Dr. Eucheria encouraged.

“No! I’m fine.” The mere thought of sharing was cringing.

Dr. Eucheria pressed no further, and for now, Kamiye though unsatisfied with my response let it slide, just for now, as her eyes held a silent promise to pry later. Except I would never tell her. It is unspeakable. Right from the heated passion with Dr. Dominic, to its very confusing and alarming end, that dampened whatever prior excitement from Dominic’s shuddering touch.

In the real sense, Dr. Dominic would never touch me that way, I would never see mother and very likely the violator at the end is probably just nothing but a pitch up of all of my fears. Thus it is unreal, and that’s the end to it!

“Has your mum gone?”

My tacit change in the discussion didn’t go unnoticed by both women, but both allowed it.

“Yes, She left with Tade already. But she sent her regards.”

I remember glimpsing her in my brief wake to reality.

Kamiye appeared glummer. I cannot tell if it is a result of the fleeting exchange with her mother or Kazeem’s death. Though her black dress and puffy eyes voted the latter, I’d bet it’s a combination of both.

Eucheria glided back into professionalism. Her inquiry about my welfare opened to a list of complaints. She smiled as she listened.

“My headaches, my arm itches terribly.” I glowered at the cast.

”It’s healing.” She summed, and then explained what reconstruction occurred beneath the cast. ‘In subsequent weeks, my bones will be rid of some screws,’ she assured.

“Does that mean I’ll soon be discharged?”

She nodded with a patient smile as she signaled a nurse at the corner. My insides grumbled at seeing the woman wielding the syringe, but I turned, allowing her access to my rear and bit back a grimace at the prickle of the needle. It was over within a whiff and then followed by the usual massage.

“Your arm was badly broken Miss Pelumi,” Dr.Eucheria was saying. “And you only just recovered from coma; for a while, you’ll be on close monitoring until you are fit for a discharge.”

I nodded in ready acceptance, for my fears of the world outside these walls had escalated especially since learning of a lurking psychopath. At this point, I would gladly stay locked in here as long as I can.

“I would include some painkillers to your dose and that would help for the pain. So just feed well and take your drugs as administered.”

I thanked Eucheria in earnest as she left. Now it’s just me and Kamiye whose sadness rang a reminder of the previous night. She posed a shadow of herself with dark circles below her eyes giving her a gaunt look. It is saddening seeing her this way. She left and then returned shortly with an overtly built man with stoic features. His frame a reminder of the giant in my dream and I searched him for recognition. “Pelumi, this is Tijani.” she introduced. “Your bodyguard.”

I glared unnerved by the intimidating man whose height just a few feet back dwarfed Kamiye’s. His presence even further proving Kazeem’s death more real than I’d like to admit. His nod was almost imperceptible as he observed me from the distance. His steely gaze showed no expression whatsoever.  With him here, already I’d begun to feel protected.

“Speedy recovery ma’am.” He said and was out in moments.

“He would be at your door at all times,” Kamiye promised. I nodded inappropriately amused by the thought of protection. Now I have my own shield to lay-off unwanted visitors like my father. How he’d made it out of jail is yet a mystery.

“Are you okay?” Kamiye settled in the plastic chair beside me and out of habit, smooth the crease line on my temples. She reads my mood well. But at the moment I am more worried about her worn face.

“How old are you?” I questioned out of the blue, and she seemed as surprised as I was to the question.

“Thirty-two,” she answered tentatively. “And that reminds me, your birthday is next week.”

I glared unmoved and indifferent about it.

“You will be twenty-eight next week Saturday.” She provided.

I pondered, wishing the past twenty years of my life will flash before my eyes as in movies. I sure would like to reflect, know my values, my mistakes and learn from it as tools to forge into the future.

Thoughts of nothing was frustrating and so I inquired of the dead man whom naturally is the most appropriate subject for discussion. And as Kamiye explained the preparation for burial, I felt awry to have asked about it but turned gratuitous to Tijani’s return to inform us of Eniola and my boss’ visit.

Kamiye in spite of the familiar guests turned expectantly to me, in a way saying the shot was mine to call. I signaled to Tijani to allow them. This indeed is serious!

The doors opened to an amused Eniola and a surprised Mrs. Ubi. Eniola neared and smacked a kiss on my cheeks before withdrawing to let Mrs. Ubi a full bear hug. Habitually, both women commented about my improved health while I smiled affectionately at them.

Eniola settled herself only after providing Mrs. Ubi with a plastic seat. Her face cracked into a jolly smile as she relayed the good wishes from unknown colleagues at The Times publishing. I am touched by their concerns, already my bedside was an accolade of it as it boasted with tons of recovery cards.

Mrs. Ubi engaged in a brief conversation with Kamiye, though she had an observatory side-eye on me. Both women I observed conversed eloquently with remarkable ease and an air of power, one of royalty, the other of an experienced boss. I half-heartedly listened to Eniola speak but more taken by my study of all three beautiful but different women whom I had come to realize deep affection for. And if their eyes were any indication, they probably felt the same way.

Mrs Ubi inquired about the guard, Eniola silenced in catatonic anticipation and soon the room burst into laughter as Kamiye teased my high-class celebrity protection. I deciphered she wanted it under wraps. Besides who would want anyone knowing they were likely targets of some deranged psychopath.

News on the newly inaugurated president flashed on TV and all women turned to it. The conversation rolled from governance to women and fashion with such remarkable ease spurred by the flashes on TV. Eniola then turned to Kamiye for help as both deliberated laces for a wedding she would be attending coming week.  Kamiye helped with an array of materials from her online page, and what was intended as one purchase, turned four different purchases-two laces and two patterned prints.

Kamiye teased Eniola’s new purchase would earn her a man.  And upon that, the conversation drifted to men and marriage as both Kamiye and Mrs. Ubi assumed roles of counselors, both explaining the perks of marriage which thankfully is nothing like I’ve overhead nurses in here discuss. Mrs. Ubi, Ceo of The times publishing and married for twenty-five years took the lead, successfully explained marriage as a plus, a part of a great support system unlike most conversations in here from nurses who believed marriage the ultimate fulfillment and height of respect for a woman.

I must say it is a breath of fresh air hearing some different view from what I’d feared was the norm. Kamiye lamented how sadly differently it was for the majority as many went into it for the very wrong reasons that made marriage almost seem like a business transaction especially for females.

But a new world was fast emerging, one where women began to pride on independence and self-reliance, with fair playing grounds like men. One where women were no longer considered liabilities as I remember my parent’s relationship. One where marriage will be of mutual love and respect. Although I am far damaged to know about any of that or want it. But then should I ever have to consider marriage it would be on the basis of love and that alone.

Shadows At The Crack Of Dawn-Episode 67