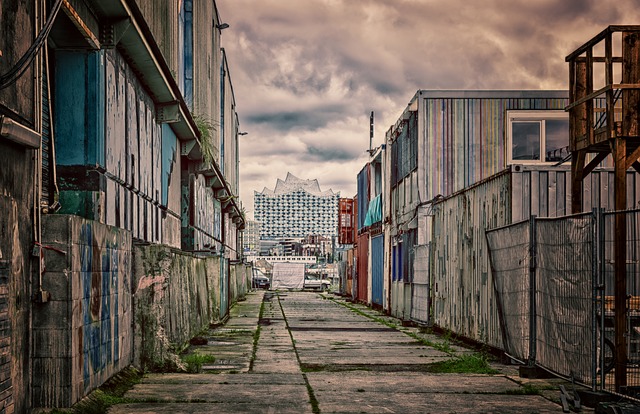 The growls and grunts of argument broke into Aisha’s sleep, awakening her. She pried one sticky eye open, and then another, taking a moment to figure whose bed she’d slept in for the night, or rather, who she’d slept with this time. It was Olumide’s place, her brain finally registered from the familiar commotion plus the stale smell of booze. He was the only man she knew who drank like fire and whose house every morning was almost like a rising riot.

Aisha turned to glare at the man whose hand was slung over her exposed bottom, suddenly feeling repulsed. With an effort, she pushed it away, thinking how heavy it was, when only yesterday she didn’t seem to mind its weight when it did wonders to her body.

Olu stirred in response, and turned the other way, allowing Aisha room to turn on her back and glare into the ceiling of Olu’s one-room apartment, before taking another glance at the naked male meshed by her side, laid in a tangled sheet gathered on his thigh while she was stark naked. She’d always been a wild sleeper.

Determined to blot the noise coming from out the window, Aisha turned on her side to better understudy the man before her whom she glared at in sheer appreciation. The previous day had been fun-filled; drinking, weeding, smoking and mind-blowing sex over and over again, her body tingled from mere thoughts. Olu sure knew the right spots to have her eyes roll back. He was one man who knew how to launch her into cloud nine. When it came to sex, Aisha was insatiable. In fact, she admitted to being a sex maniac, and so far only Olu had been able to match up to that, even exceeding it for she knew no man with a much greater desire than hers than him. The man must be a horse; she chuckled to herself.

Apart from Olu, the only man who had ever been close was Tomiwa. If Olu had an A Asterix, Tomiwa had an A. Aisha frowned at the trail of her thoughts, pushing it off almost as soon as it had come lest it sullied her wonderful reveries from the previous night.

Though the noise outside had escalated, Aisha was unmoved by it. Fights and quarrels were a norm at the hood, there was no point getting bothered about it. They would fight, break a few bottles, one or two might get injured, some might survive it, some might not, but things will calm again. That was the pattern at the hood; it was their way of life.

Smiling, Aisha glared at Olu’s hard stoned face, wondering how he could still manage a sound sleep with the stampede just outside his room. She started to push out of bed when his arm flung past one of her breasts, gently squeezing with a mischievous wink, before turning to continue his nap.

Aisha smiled and pushed to a sitting position. The bed dipped as she did. The mattress had surely seen better days but that was the least of her worries as her head suddenly felt light and heady and at the same time, reeling with a deathly throb that everything began to seem weirdly out of proportion. She bowed her head in her palms and shut her eyes in what was undoubtedly a terrible hangover. And when she reopened them, she felt more stable at least. Not rid of it but stable enough to get to her feet without falling. She liked to plan her day in bed, but for now, her first thought was on breakfast which she was yet to decide even as her stomach growled in protest.

Olu stretched beside Aisha with a satisfied grunt and turned on his side again to face Aisha with eyes unashamedly raking over her gloriously naked form. He thought her a masterpiece and could not even hide the clear admiration in his eyes.

Aisha grinned in satisfaction, proud of what her body could do. It was by far her greatest asset, apart from her schemes of course. The body had drawn Tomiwa to her, and for a moment back then, she’d been happy she’d bagged herself a rich guy. She’d sworn never to leave, but life had not treated her well and she was back to square one with this good for nothing fellow junkie, and sex maniac. Each knew nothing could come of their relationship, but they enjoyed it while it lasted. Both helped to scratch the other’s itch, nothing else mattered as long as the sex was good.

“I’m not cooking!” Aisha sternly offered. She wasn’t the sort to slave in the kitchen for a man, not even herself.

“I think there is some bread over there.” he pointed at the top of the fridge. “There’s also sardine in the cabinet.” He announced stifling a yawn.

Braced, on one hand, Olu steadied himself as the mattress rocked from Aisha’s weight rising from the bed.  He watched her prowl nakedly across the floors where their clothes were tossed from the previous night. The house was in a big mess, but that would be cared for later. But at the moment what drew his attention was the voluptuous figure rummaging his fridge for food. With how she mechanically worked in preparing them a quick sandwich and cold beverage, shuffling through the cabinets, one could tell she was a regular at his place.

Soon, Aisha was back with a filled tray in hand and carefully laid it before him. For a moment, Olu considered her his Queen, and he a King as he rose to join her. Both ate in silence, lusting at the other’s nakedness.

Aisha was different. She unlike the majority of women he knew was comfortable in her sexuality. Bared and stripped under his scrutiny, other women would run for cover, but not Aisha. If anything, she matched every challenge inch for inch, which was one of the very reasons why he cared for her, why he loved her. I mean what was there not to love? She smoked everything and anything, she drank anything and fucked like hell. Now which equally messed up addict wouldn’t want that. Sadly, she didn’t love him, and he knew. The man she loved was the rich dude who had just dumped her. And as much as she tried to deny it, he’d seen through her and her feelings for Tomiwa. Not like he was promising her forever or anything serious, but still, it hurt him that she loved someone else who had only used and manipulated her in every way possible before discarding her. Try as he may, Aisha would never love a broke man like him. If he ever got loads and loads of it, maybe she might reconsider. Like him, she was all about the money. But if she ever came to him that way, he wouldn’t mind and would have her in a heartbeat.

“You know it’s almost tempting to stay indoors today, but I promised to help Tokunbo today.”

Olu knew what she meant because he felt it too. And as she passed him a most seductive pout, swallowing with a low moan he felt himself harden and found her gaze trailing down there with a bit of triumph in those eyes before returning to his face. Her eyes were darkened with lust too, with an underlying promise passed in-between.

“As tempting as you are, I need to get back to work. Money first.” She continued

Olu nodded, briefly lowering his gaze to conceal pain at her quiet insinuation; another testifier to the fact that he was nothing but a mere distraction. Slowly, he felt himself go limp as both continued their meal in silence until Aisha broke it again.

“You know, I really wanted them to suffer, all of them. But then I realized how much I could make from this. And I swear, I can’t wait to see the look on Tomiwa’s face when he realizes  that he lost to me.”

That name again, Olu winced, devouring the rest of his meal in silence. He knew much about Aisha’s plans of blackmail, but at the same time little about it, except that much money was involved, though how much, she wouldn’t disclose. And he knew she had done that on purpose, it was almost as if she was intentionally spiting him.

Aisha swallowed off the last slice, glaring at Olu as she downed some water. The change in his demeanor when she’d talked about the money had not been lost to her. The way his eyes had darkened and his pupils dilated in curiosity, except this one she was keeping from him. The money was hers and hers alone and she believed he had understood that much. She might let him have some, not because she was obliged but because she felt like it.

Aisha reached for a Banana, one of three, and slowly peeled it off with her eyes yet trained on him, starting from the tip as she began to lick at it, gently at first and then wholesomely, taking larger portions of it even into her mouth. Her slow seductive administration on the fruit drove Olu insane. Knowing it herself, Aisha dipped it further into her mouth, closing her eyes, and with her mouth tightly closed around it, she sucked and slid it in slow successive motions that caused Olu’s body to tingle with excitement. Blood rushed to his groin, he immediately felt himself harden.

He’d had enough of her torture, and unable to take any more of it, he pushed away the tray separating them, not minding as portions of tea spilled all over it from his jerked movement. He knew what she was doing, but he cared little about it as what he was most concerned about was the sudden need to have that mouth around him.

Shadows At The Crack Of Dawn-Episode 88