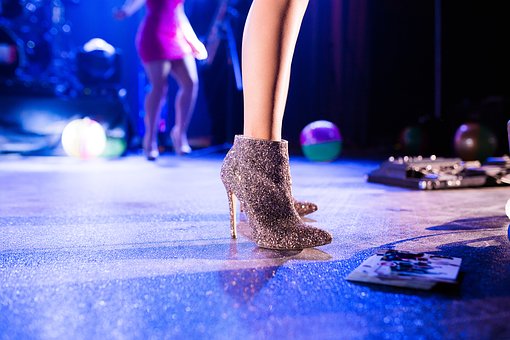 Kamsi tuned to her favourite fashion channel and dipped her hand in the shared plate of suya barely dropping the remote. Her lips spread with a satisfactory smile as a red carpet interview rolled on the huge plasma screen.  “Bibi.” she introduced to Dominic the presenter slash interviewer in green Ankara print dress. The interviewee, a movie celebrity gave a short laugh at the interviewer’s joke. She too was dressed in a snug-fitting Ankara with eye-popping colours that prompted comparison to a peacock. Albeit, the dress was a pure work of art.

A sweep through the crowd showed a vast array of Ankara prints, ranging from long gowns to short ones and masculine wears. Only a handful of the guests had appeared in foreign attire. Most had a jazz of culture.

The show skipped to the main event; runway, where a bunch of skinny, dark and tall girls strutted in different pieces in sky-high stilettos which were particularly hard to miss.  He wondered how they presented a brisk show in them without a trip. He was barely finished appreciating his masculinity, and his save from the endless feminine ‘troubles’, when a model, tripped but quickly caught herself from a fall. Her rigid face broke into a smile as she straightened and proceeded her sashay down the long catwalk amidst a round of clap. Almost immediately, her face returned to its rigid mask with a strong stoic expression as she did her spin and walked away like the last ten seconds never happened. He hoped she had not suffered a sprain.

Dominic was not one easily swayed by art. Fashion shows especially, were not his thing. Nevertheless, he was a respecter of beauty when he saw it, and this was one. The blend in indigenous African culture and contemporary style was impressing. Each design spoke a kind of creativity that better projected the almost extinct African art in its originality. In a brilliant way, it also expressed the natural allure, grace, and beauty of the African woman. The pieces could almost match with any foreign one.  In sincerity, local designers probably still had some way to go, but they were far from what they used to be. Evolvement in African fashion was notable, there was hope. Hope finally for Kamsi’s dreams.

He turned to his child who had her undivided attention on the screen. Her jaw moved noticeably as she chewed. He could not help seeing her mother’s face even in her side view. Almost everything about her was a reminder of the woman he had loved, except the trademark ‘Ugbonna’ nose that had been passed down from generations. That, she had taken from him. Irrespective, Kamsi would sure grow into a beautiful woman just like her mother had.

Kamsi threw another slice of the shredded pepper sprinkled barbecue goat meat in her mouth, and only looked into the plate when she reached for a handful of vegetable. Since she had learnt of antioxidants and its benefits, she’d developed a sudden addiction to as many fruits and vegetables she could lay her hands on. She took another handful. Dominic could not help an amused smile. Indeed he was proud of the healthy child he was raising. If only she was not such an extremist at everything. Another trait she’d taken from him.

Kamsi’s delightful whoop drew his attention back to the TV, and to the most unimaginable creative gown he had ever seen. Fitted to the waist, and bogusly layered all the way down, hiding the model’s feet.

To him, it was sort of hilarious. He found it hard to imagine how the model walked effortlessly in them. Kamsi tried to explain to him the intricate layering of the dress. Her effort was fruitless. Not that she knew of, because Dominic nodded in feigned understanding and interest, unfortunately egging her for more details. The only thing to him that made sense in the dress was its mid-length; plunging neckline, really low back, right to its cinched waist where the preposterous layers began. Dominic could not seem to wrap his head around his kid’s amusement and fascination with the design. Perhaps as an aspiring designer, she saw things in fashion he didn’t.

Once, Dominic had secretly shunned her dreams. The reason was simple; that sort of dream rose faster in developed countries with better business structures, advert, funding, and a thriving economy. In the past, Dominic would rather she opt for a more suitable profession as kids are age would; engineering maybe, banking, architecture, medicine or anything else that was sure to bring a life of comfort and stability. All it had taken for a change of heart was a couple of critically weighed factors. Firstly, he’d had to get rid of the country people’s pessimistic approach to entrepreneurism. A country where its people doggedly chased white collar jobs that were not enough to go round. He had taught himself to be grateful for his kid’s entrepreneurial spirit in a country where unemployment and nepotism were on the increase. He would not fall victim of the same mistake as most parents did in imposing careers on their kids. Direction, advice and help, he would give. But the choice to make was hers.  There was no such thing as unproductive career, what there was, was lack of vision. He would give Kamsi educational stability, something to fall back on in case things didn’t turn out as expected. (Really, there was nothing wrong with having a backup plan.) But he would let her be anything she wanted to as long as she remained passionate, persevering, and believing. For now he would let her grow, for kids were known for their constant switch in future ambitions corresponding with their regularly changing interests. All the more reason he should not get bothered about it. At least till her final self-discovery. At the end of it all, if she was still bent on it, then he would help with the realization.

Dominic marveled at the big designer names that rolled his Kamsi’s mouth. Her ‘role models’, she named them. At that moment, he could almost bet Kamsi’s ambition was here to stay. One thing he knew her as was decisive and straight. Another attribute she’d inherited from him.

Kamsi picked up her glass of juice as a commercial rolled into the screen. She took a drink from it and returned it with an almost silent bang. “Dad?”

He hummed in response as he picked a last piece of suya, and passed the plate with the rest of it to her. It was customary that the elder left off a reasonable amount of a shared meal for the younger. That, coupled with her keen interest, was why he withdrew.

“We wrote an essay at school today.”

“What was it about?”

“My mother. That’s the title.”

Dominic gave an inward sigh at the sudden familiar dart of sadness that arose when discussions of her mother came up. One would expect eight years would have done some healing trick. “So what did you write about?”

“You!” Kamsi chuckled at the confounded look on his face. “Because you play both roles perfectly.” She continued, flashing uneven sets of teeth.

He smiled back, speechless, and choked with a surge of emotion.

“My class teacher asked why I wrote about you. I told her about mum and she started apologizing for asking.” Her shrug was nonchalant.

Dominic pulled her close for a tight embrace. “Dad” she looked into his face and stared into his eyes like she does when a matter was of grave importance. “Are you ever going to get remarry?”

Dominic eyes pop wide in their socket, he thought they would fall out. For years he had sensed her silent need for siblings, and possibly a mother figure. He’d always known at some point, the question would pop, and had always thought he would have an answer ready by then. He had not expected it so early, or to be caught unaware.  “I don’t know. Maybe, maybe not.” He answered in sincerity.

She wrinkled her nose thoughtfully. He could tell his answer was not satisfying. But she seemed like she’d let him pass.

“Do you remember my friend Cynthia?”

He nodded. Of course, he remembered the lanky kid Kamsi had once stood up for in school, thus earning her her first fight, and her last one, he hoped.

“Her real mum is dead too. But she has a new mum-a step mum.  And Cynthia says she is really nice. She even calls her ‘mummy’.” Kamsi’s eyes filled with sorrowful longing. Dominic had never known how bad she wanted a mother.  “That’s who she wrote about today.” Quiet lingered again in the air for a moment. “One more thing dad.”

“When, and if you eventually want to get married, please not Nurse Titi, or Aunt Linda”

He was stunned, and he did not hide it.  Kamsi’s dislike for his ex was a known fact like her dislike for bread and butter. But nurse Titi? Whatever gave her such a ridiculous notion was incomprehensible. Impulsively, a deep roar exploded from his throat like a loose cannon. He finally stopped, when he saw the seriousness on Kamsi’s face. Dominic gently framed her chin in his palms and stared into her eyes with the sincerest of stares he could muster. He could somehow tell his response at the moment would mean a lot to her.

“Baby, I don’t know whatever brought any insinuation about Titi and I. But I need to assure you that nurse Titi is nothing more than a nurse I work with. Nothing more.” he reechoed the two last words emphatically clearing whatever unbelief she held. “Kamsi,” He rasped in surprise, “Why would you think that?”

She snuggled closer into him, gathering solace and comfort from both his words and his presence. “Nothing. I just thought I noticed something.”

She shrugged indifferently and settled deeper into his side.

“Well, you thought wrongly. And like I said, she is just a colleague. Besides, even if we had a thing, why would you not want her?” he teased, and she could tell he was as she lifted her face into his gleaming one.

Again, she shrugged. “She is just not the woman for you.”

He let out a deep moan, trying to make sense of her statement, and fought to no avail to bite back a smile. This was one of those few times she sounded like some all knowing god who knew what was best for him and not. “So what kind of woman is the one for me?”

She started with a lopsided grin, finding both amusement and seriousness in the sudden turn of the serious discussion. “Beautiful, smart, and of course she must earn my approval. We must have an understanding.”

Amusement faded from Kamsi’s eyes as she turned serious again. “Please dad, if you are ever going to remarry, neither Aunt Linda nor Nurse Titi is acceptable.”

Dominic wrapped her tightly in a snug embrace, and smacked a resounding kiss on her forehead “Yes ma.” he answered unable to keep out a bit of sarcasm.

Kamsi giggled as he poked and tickled her, not stopping until she’d had a good laugh. The show picked again from where it had stopped before the commercial, once again stealing Kamsi’s attention.

Titi and him!? Dominic thought in awe over his child’s head. What a joke. He smiled at the thought, wondering what had given Kamsi such a crazy, unthinkable notion.

Shadows At The Crack Of Dawn-Episode 50