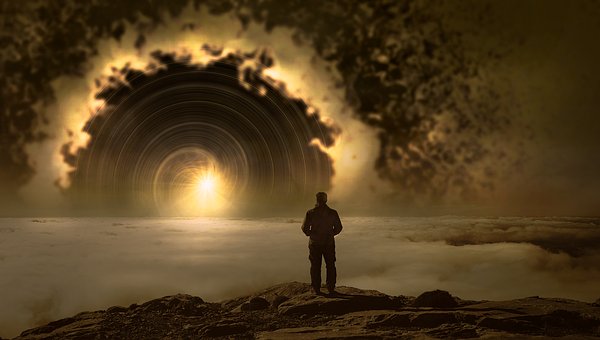 The scent of nature wafting in the gentle breeze made for a heady combination as I turned in circles absorbing the setting sun in the cloudless sky. In the distant horizon, the sunset shone, a mesmerizing blend of orange and crimson, leaving a faint trace of orange in its wake. Never have I felt as free-spirited and free-willed as in this moment, and with eyes shut, I basked amidst the beauty spinning exhilaratingly.

My eyes flew open as warm hands from behind closed around me. The strong whiff of that exquisite cologne announced his presence. It was Dominic-this time not a fragment of my thought, but full-fleshed.  I turned in his arms facing him, and he smiled down at me with cool affectionate eyes with a hint of mischief lurking not too far.

I spread my palms over a taut broad chest. His muscles bulged and flexed beneath my fingers, and I am overwhelmed with a sudden strong urge to free it of clothing and feel warm bare chest against my palms.

The gentle slide of Dominic’s fingers down the slope of my back was slowly driving me to cloud nine. The touch though simple sent sweet shivers into my stomach. Sigh! The strange and alien feelings Dominic aroused.

Now at this moment,  I had eyes for just this beautiful face, I am oblivious to all but him. Not even nature that once had enveloped my senses, or the slow wake of darkness behind. His lips came down on mine softly, in feathery light kisses that caused my senses to sing in the highest soprano. Gently, my lips parted allowing his insistent lips, while on staccato breath I savoured the intertwine of flesh. I shuddered as he claimed my lower lip, suckling and biting in the most erotic way. A thousand stars floated in my head. And an involuntarily gasp found its way as his tongue slid farther. I moaned, in ecstasy whilst dancing to his tune.

The tempo gained with such staggering intensity resulted in a million explosion of fireworks. Jeez! Who would have thought kisses could feel this good. I held to him, more like clung as we both sank into the tides uncaring.

Soon, kisses were not enough. It was just too insufficient to fill that void. I craved for more, uncaring whatever that was. Dominic pulled away just then, his withdrawal was accompanied with a heavy hit of emptiness. I stared into his face confused, twirling in a sea of nameless emotions and filled with a deep sensual longing.

He started for my button with lurid eyes, and with steady experienced hands popped off each with gentle ease. I sunk deeper from as much as the depths of that eye to the touch. His hand brushed against my chin, I shivered, attuned to it and the cool air whispering against my flesh from where the buttons came open. My blood now ran a hundred degree.

My arms locked behind his neck, pulling him lower with me as we settled on bare earth. His darkened eyes met mine with lust and shared excitement as he tore at my shorts. He tugged off my shorts, freeing my arms and I let him, oblivious to his brashness and the force with which he did. He rammed back into me with a hot and heavily grunted breath.

As that face came up, I looked back into it-concerned, and I’m stunned at it. Excitement vanished in place of fear, as the once affectionate eyes grew fiery, and his touch now wickedly violent and outright abusive.

I fought to pull off, and panic flamed like wildfire at his aggressive pull and press against the hard ground. Thorns pricked into my side as the body which once had felt like haven pressed upon me.  I fought to pull off from the once magical hands, but I was no match for him.

In the struggle, I watched the face go dark and then in an instant, the face was (all of a sudden) not Dominic’s.  Thunder rumbled from the distance, and then a bolt of lightning momentarily illuminating the wilted plants sweeping across the grounds as cold as death.

Crazed, I fought to rid this huge man with angry, malicious, desperate and wicked eyes, but the hard press of his body suffocated what little breath I have. In spite of the cracking smacks across my face, I fought with my insides screaming for help. It ached where his long sharp fingers dug and I cannot seem to extricate from his hold, because the more I fought, the more bound by an invincible chord I am with this stranger. Strong, large hand captured my arms, helplessly pinned above my head. Tears gave way as his palms grazed roughly on my skin finding his way beneath, and I felt my shorts give way under his persistent fingers.

Lightning bolted again, and from the corner of my eye, I see mother. She has a kettle in hand and seemed somewhat torn between saving me, and the last existing plant. She chose me, but not until after a long forlorn look at the plant, she bolted to my aid. Tears of relief sprang to my eyes as she came for me. The wind blew wildly around her but she wouldn’t stop, but valiantly fought against its currents. She was close, really close, but in a flash, she suddenly was carried by a sudden hurricane blast. Dazed, I watched as she was taken, twirling in the wind that took her further afar.

I sobbed in defeat, hurt, hopeless and pained as she disappeared with the last thread of wind. Already, I am spent and lifeless beneath this giant, I screamed heavily into the night and soon was joined by teeth clattering triumphant growl of the man atop me. I had lost to him, somehow I knew it.