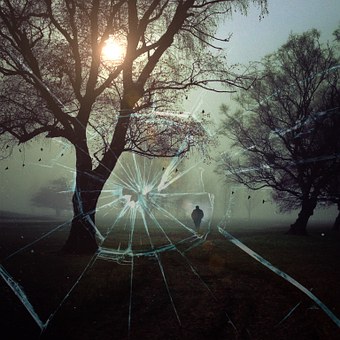 Kamiye’s tears had receded. All she gave off now were gentle sobs, as she stared numbly into space. The whole family too was spent from weeping. Tade had reclaimed her spot at the corner; her mascara smudged eyes awarded her a ghost-like appearance-not that she cared about. The room had turned deathly silent except for the occasional muffles from the sorrowing boys on the queen’s bosom. Grief struck herself, she wrapped them tightly as if shielding them.

It is unbearable seeing the family in so much pain as I too I am not exempted from it. It doesn’t matter I had only known Kazeem for just a moment. He was a familiar face, a good person, close to the family, and now he was simply dead. My eyes blurred again with tears.

As relayed by attention hankering witnesses, the shooting was from an unidentified biker. By their reports, the shooter’s aim had been the car as they’d consistently shot at it. This leaves room for many wonders.

What if Kamiye and the kids had been in that car? I shuddered at the thought.

The door opened just then, and every eye wandered to it as Tobi entered befuddled and tired, with Dimeji and a then stranger. Onsight, Kamiye rushed to her husband and threw herself on him. Tobi managed to brace them both with a slight wobble on his sticks. While Dimeji glumly crossed to the queen and bowed in reverence. From afar, the stranger acknowledged her with a nod and continued his quiet perusal. Amidst the pain, Olori managed a gentle smile and patted Dimeji’s back with her horsetail. Dimeji settled afterward on inquiring everyone’s fare.

“Kazeem is dead,” Kamiye announced, pulling off Tobi. “I can’t believe it. He was here just about an hour ago” Her voice broke with hiccups. “I sent him home since you would be collecting us. Next thing, he is dead.” she trailed off in tears, burying her face again in Tobi’s shoulder as he whispered some hushed consolation to her.

Tobi was soon relieved by Dimeji. Kamiye was too grieved to notice the change in shoulders as she was led to a seat. But she did, for as soon as they both were settled, she reverted to her husband.

“Are you alright?” Tobi mouthed at me. Alas! He notices me.

I nodded wanly, panged at his apparent exhaustion.

The stranger cleared his throat noisily and succeeded in garnering every attention. First, he shot a silent apology to the queen, then turned to me. Our eyes held for the first time since his entry, mine indifferent, his expressionless until settling on the twins.

“Tade, please take the boys to the reception.” Kamiye weakly ordered. Languorously, Tade pulled to her feet, and in the next moment, the room busied with shuffling feet and lapsed into silence as the door closed. The stranger eyes again drifted to me and back to Tobi with the same underlying message.

Surely he is out of his mind to think he can scare me out of my room. This is my territory!

“It’s okay, she can handle it.” Tobi intervened.

I glared at the stranger, angered at both his presence and audacity. Who does he think he is showing and meting orders?

He cleared his throat again, and I snorted. He must have heard. Only that explains his sharp stare which I met with steelier ones. He retreated and averted his gaze. I smiled triumphantly having won the tussle, only to fume moments later when his lips curved in mockery.

“Hi, I am Inspector Tega.” He briefly introduced. “I believe there are reasons to think someone is after you and your family.” Silence passed with impassive glares, except Dimeji who seemed the most astonished.

“I meant your whole family”

My heart fluttered as his eyes met mine again.

“Your accident seems pretty random, but recent events leave room for doubt and further investigations. I don’t consider this attack random. I’m beginning to think there’s actually more to all of this.”

I shivered at the sound of his words and worse when Tobi’s head bobbed slowly in agreement.

“No, it can’t be! The car wreck was different, that was just faulty brakes right?” Kamiye voiced my thoughts defensively.

I frankly wish she was right, but from the man’s look, I could tell her hope was soon to be dashed.

“Yes, as at then, that’s what investigations pointed. But like I said, recent happening has opened our eyes to possibilities. There’s no verdict yet, only proper investigation would tell its outcome. I just need you to prepare your mind for whatever. It could get worse.” His eyes spoke belief. “In fact, for everyone’s safety, it is important you know where this might be headed.”

As much as I hate to, this stranger I realized, might have a point. But the mere thought of someone lurking after the family is creepy. For the first time, I am appreciative of these hospital walls.

“But who can it be?” Kamiye’s voice quaked.

“We don’t know. That’s what we are going to find out.”

The man provided Tobi with some response. “Firstly, I think what you need is personal security… for everyone”

Kamiye seemed whipped. “That’s impossible.” she scoffed with a burst of derisive laughter. “All of this is impossible! Who would want to attack us and for what reason? I bet everyone is just being paranoid for no reason.” She flared. “I will not be scared that way, and I would not have someone trail my every step.”

Tobi tried talking her into reasoning, but she would not have any of it.

“Let’s be realistic Tobi.” Her laughter clinked dramatically. “Bodyguards for me, for you, the twins, Pelumi, that’s outrageous, insane and impossible!”

She stopped confounded at the stranger’s interruption.

“It is possible,” he repeated empathically as if she had no choice in the matter. “It’s pretty easy Kamiye. All I need is your cooperation. Besides, this is literally your life and your safety on the line.” His gaze and the mention of her name spoke of a level of closeness. She calmed.

“But Tega, isn’t this blowing things out of proportion?” Tega? The legendary inspector? “Isn’t it weird having guards follow the kids through school? We can’t do that. This is putting so much attention on us.”

“Don’t be ridiculous!” The queen snapped, bounding to her feet, finally baring out of the shadows after sitting too long in reticence. “If a guard is what you need, that you will get!” she firmly imposed, silencing Kamiye’s protest, and then to Tobi. “I trust you will do all you need to, to keep her safe. I cannot lose my child…again.” Her last word hit me.

The queen’s phone rang, and the room quieted as Olori answered on a voice unbelievably low, relaying the occurrence to some person at the other end. From the drop in her voice, you could tell she was speaking to a much esteemed authoritarian. Who else than her husband, the king.

“Your father says you are getting surveillance.” She simply said to Kamiye as the call ended, and resolutely matched back to her seat with shoes clicking softly behind her.

Kamiye murmured her dissent to Tobi, who with gently spoken words and soft pats rendered her some comfort. The queen ignored the pass.

“I will keep you updated on our investigation,” Tega said, pushing off the wall in finality. Kamiye murmured her appreciation while also imploring him to bring Kazeem’s killer to justice. I studied the man who had put a closure to an accident, which ironically was reopened. I still cannot tell if that’s good news or not.

“I’m not a monster Pelumi,” Tega said out of the blue, turning on me with a gentle smile. “I’m only doing my job.” He explained.

His words however convincing, they had zero effect on my already morphed impression of him. He darted forward in a twinkle and claimed my hand in a firm shake. “You look so much better. The last time I was here, you were still in a coma.”

I gave no response, except an impassive stare as he left.

Shadows At The Crack of Dawn-Episode 34