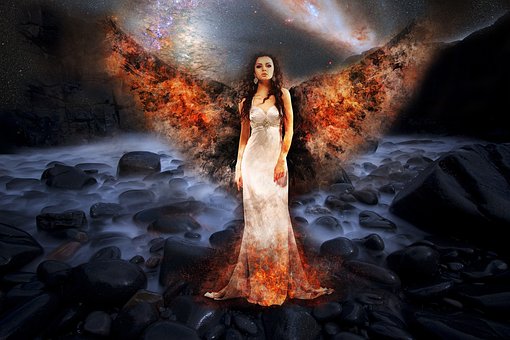 That night, Kamiye came, I let her stay. Not out of kindness, but for more selfish reasons. Admittedly, the past three days have been lonesome and I do need Kamiye’s company…badly.  But of course, I would never tell her this. I am too proud to.

For the umpteenth time, I assured Kamiye all was forgiven and forgotten. And truly it was. I’d realized my anger and hatred was wrongly misplaced. Kamiye had never even met my mother, and Tobi to the best of his ability had pleaded mother’s cause many years back.

With that settled, all was back to normal. Conversation sailed smoothly with barely any reference to the matter. In moments, Kamiye was laughing hard and clutching her ribs at some comedian’s joke I relayed. She bounced on the bed, giggling like a schoolgirl. The crackling sound of her laughter in my ears made me smile. It sure had been missed.

Suddenly she touched my hand. “How are you feeling?”

Sigh! Kamiye had the habit of chipping the serious into the trivial.

I shrugged, and she nodded as if understanding my plight. Her touch on my arm grew insistent. “Tobi wanted you to know how sorry he is.”

I started to pull away but she held firmly with a softened gaze.

“Please listen. He was going to tell you everything. But the time was just not right, and Dr. Halima thought we should wait. She said you were not ready yet.” I listened as she cited words similar to the psychologists. My lips twitched with a suppressed smile. Courtesy of Dr. Halima, Tobi was free from my wrath. I would tell Kamiye, but for now, I relished seeing her so apologetic.

My lip’s involuntary twitch had given me away. “Nothing.”  I chuckled out loud and finally confessed taking pity on her. “I’m not mad at Tobi.”

She sighed in relief that faded on my next sentence.

“But I’m angry at just one person.”

The fall in her demeanour spoke her clear discontent on the matter. But there was little she could say or do. Thankfully, she didn’t press, probably for Tobi’s sake. He like her had only recently been vindicated.

Dinner was served in silence, and we ate in almost utter silence until Kamiye started some discussion. I’d missed dining with her company.

“Eat!” she jokingly charged as she cleared her now empty plate and returned to collecting some fresh supply of movie. I couldn’t help noticing her bag. This one had boldly inverted C’s etched on it. I recognize that logo.

Kamiye turned seeming looped at first, and slowly her eyes grew with understanding. “Yes, it is.” She took out a moment to glory in my progress before resuming to her activity.  Kamiye was spending the night. The size of her bag spoke it. My guess was further ascertained when a nurse appeared a couple of minutes after with a makeshift bed.

Kamiye said her thanks with a brief glance at the woman as she busied with slotting a movie in the disc player.

“Please tell me that’s not Titanic?” I asked over my almost finished plate of meal.

Kamiye’s head fell back in laughter. She was quick to dissuade my sarcastically asked question. “It’s a Nollywood movie, you’ll like it,” she promised.

Now, Titanic is a great movie. I have no problems with it, except in seeing the same movie over and over as Kamiye seemed to have taken a particular likeness to it.

“Tade wanted to come to see you.”

Tade is Kamiye’s much talked about younger sister. I have not met the younger princess since my return from the dead, but I know enough to know she was a spoilt brat. I ate the rest of my meal listening to Kamiye’s talk about the twins and their constant squabbles with their aunt.

The movie started with an explosive, ear-deafening sound. Kamiye punched ferociously at the remote, her action sent scenes flying over the screen. Advert, she said. And when the movie properly began, I wondered why a substantial amount of it had been filled with that much advert.

A familiar face filled the screen, extravagantly dressed and strutting through doors with a gawky man on her trail, looking very much the role of a servant. Her brusquely meted order at him as he scurried past her with a large box was enough proof of their positions.

Kamiye’s attention I noticed was fixed on the persons in the mini-sized screen, and soon I found myself doing the same. I have long realized what a sucker for movies she is; African movies precisely. She considered them more relatable. I, on the other hand, I’m indifferent to either. A good movie was all it took-African or non-African. But I must say Nigerian movies are entertaining. I find the fashion particularly relatable.

Finally, my cooler was scraped empty and shinning. Its bottom reflected a blurry image of me, and I fathomed what chemistry differed in its blurriness from a mirror’s clarity.

A cry from the TV again stole my attention. Soon, I found myself transfixed to the movie until a form resembling Dominic appeared, again steering my thoughts to him. Since he stepped through the door earlier in the day, I have been muddled. Everything about the doctor elicited strange emotions. His presence, his touch. Sigh! My skin tingled just from the mere thought of him.

I would decipher the cause for my reaction to the man. But first, I hope he had not noticed the jitters, the breathlessness, the sudden clog in my throat, the erratic thud of my heart, or the fierce shudder whenever his skin collided with mine. I would die if he found out.

There is something about Dominic. Whatever it was, spoke allure and danger at the same. Also, there is darkness, though somewhat fierce, it is nothing compared to fathers. This is different, exciting but almost as fearfully intense. That man threatened to awaken a fire in me. Worse, I am drawn to it.

But then, it might be an effect of the cursed amnesia. For my feeling for the Doctor was almost as palpable as father’s, both reeking terror and fear. From both men, I have learnt there are two sides to fear and each side like a double-edged sword seemed capable of destruction. I’d experienced one, and it had cut deeply with tremendous pain. The other remained a mystery, though with a tendency for something even more overwhelming than pain. Worse, I am unsure if I am willing to bear it or not.